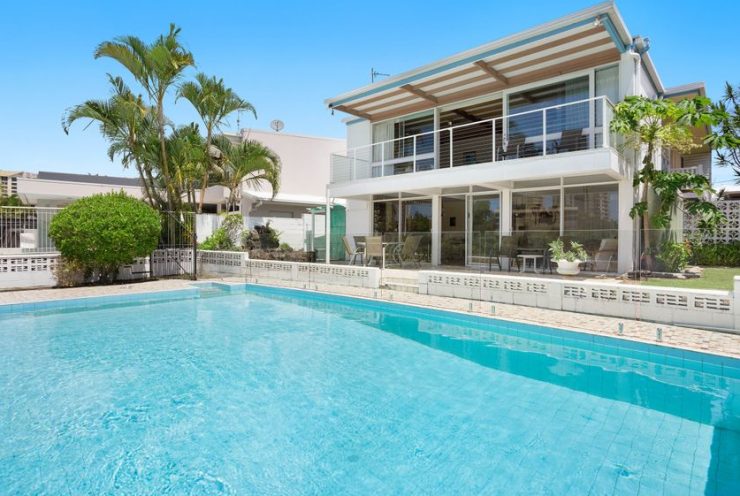 The farewell continues in a place we’ve been slowly saying goodbye to a lot recently; the ‘old’ Gold Coast. And in the tradition of the classic ‘one we missed’ we have today a 1962 cracker, sold a couple of months back, reported to be the third residence ever built in the pioneering Mid-Century development aspirationally named the Isle of Capri. And what a riverside dream this commission for architects Douglas & Barnes was in its heyday (as the included pictures from Home Beautiful Sept. ’65 attest). With many thanks to Monderist Australian, Nick, for all this info and this superb commentary from the original owner’s children;

“………..the house was a notorious Gold Coast party house during the 1960’s as their parents were close friends with all the families that owned the Gold Coast Motels such as Pink Poodle, El Dorado, Tiki Village etc. The daughter remembers everyone wearing Hawaiian shirts to the cocktail parties around the pool. There was an old record cabinet that had some old Hawaiian records and other exotic records so you can only imagine what it must have been like. WTF happened to this town?!?”

What indeed.
As we’ve cited previously in the loss of similar rare gems such as Corbould House and the gravely endangered Sunset Strip Motel the transitory and shark-like propulsion of ‘development’ in this particular locale has left no room for cultural stocktake and valuation which, from an MCM aspect, is heartbreaking as like Las Vegas in the USA it blossomed in the era. Unlike the highly prized Art Deco of Miami, the Googie streetscapes of Surfers were never truly appreciated and today hang by a mere thread.
That said, hindsight sooking gets you nowhere and the plain truth is that the local council will not make moves to save anything unless you all make some serious noise. So in that spirit, here is the City of Gold Coast Heritage Register page with more than enough ways to preemptively draw attention to that which is still worth protecting, we are sure there are one of two more gems out there, so go for it Goldies!