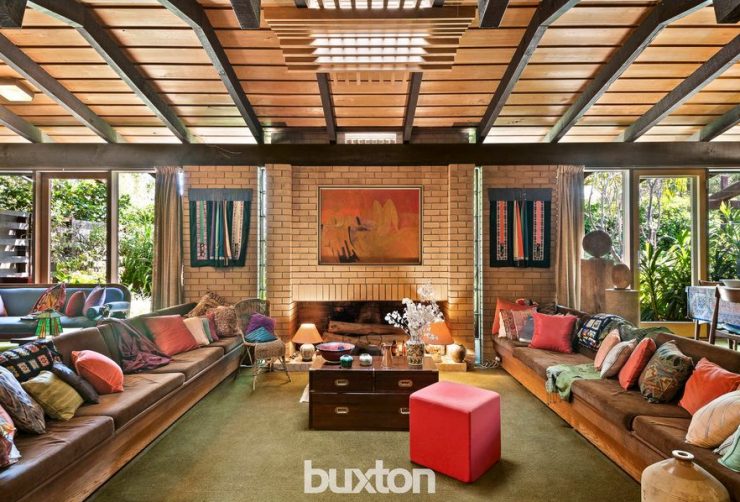 Today we finally list this home, because today after an entire week online, the agent finally decided to publish some interior shots, previously it was an exterior and aerials only. Never mind that it was the residence of one of Melbourne’s most esteemed architects – Geoffrey Woodfall – for decades. Never mind that this home is an important, incredibly intact example of Mid-Century Australian domestic architecture in all its unmolested glory since it was built in 1966. Never mind that the interiors, the spaces, the rather Wrightian framework of this impeccably progressive design, perfectly translates into a warm and tranquil living proposition still 50 years on. Nevermind that this home has been cited and celebrated by the pre-eminent Philip Goad, The Age, Australian Home Beautiful, Australian House & Garden to name only a few. No, never mind anything like that, because according to the agents all that matters here is an abstract block of land. We suppose some real estate agents wonder why their industry is often viewed by others as populated with insufferable carnies in sharp suits, dull of intellect, not interested in anything beyond price ranges and pedestrian sales schtick, a breed seemingly unable to differentiate beauty from bloat. In the same way, we continue to wonder why such ‘professionals’ wilfully ignore the value to be sold here – materially, culturally, historically and spiritually – noble aspects in and of themselves, but which are also proven to make for a gamechanger sale. Nobody (certainly not some self-styled ‘developer’) goes out on a limb for a single slab of land. An incredible slice of architecture to the right crowd however….they may move mountains. Some people will simply never learn, so in full knowledge of that situation what we’d love to see here (aside from an appropriate heritage listing) is for one of you good people out there – one who cherishes this architecture and all it stands for – to impart a lesson for all involved and snap up this landmark home, for keeps and as is.

** Update** And so it is that in less than 2 months from this sale, despite the decent exposure on many media platforms, the concentrated efforts of those stalwarts at Beaumaris Modern and perhaps because of the stereotypically tepid (AKA tits-on-a-bull) action of the local council this home is now a ‘cleansed’ building site.
Brighton Developers – the title of choice for those who embody the particularly insufferable traits of avarice, dishonesty and vacuity (which no amount of prescribed high-end SUVs, blonde influencer wives, accessory children and expensive sunnies can cure BTW) hit this place and hit hard – not least when said purchaser/developer was actively questioned by Heritage Victoria the likelihood of demolition of this home (to assess the precariousness of its future) to which they responded in the negative, only to call in the bulldozer the. very. next. day.
We try to stay positive and not throw up our hands, but when an enclave with all privilege and power bestowed upon them is still dotted with MCM architectural gems (the kind of which others could only dare wish in their streetscapes) yet remains beholden by the cheap destruction and seduction of insipid, commercial dreck served up as ‘designer living’ we know we’ve underestimated just how culturally retarded and intellectually low one place can really go.

** With The National Trust also weighing in here.