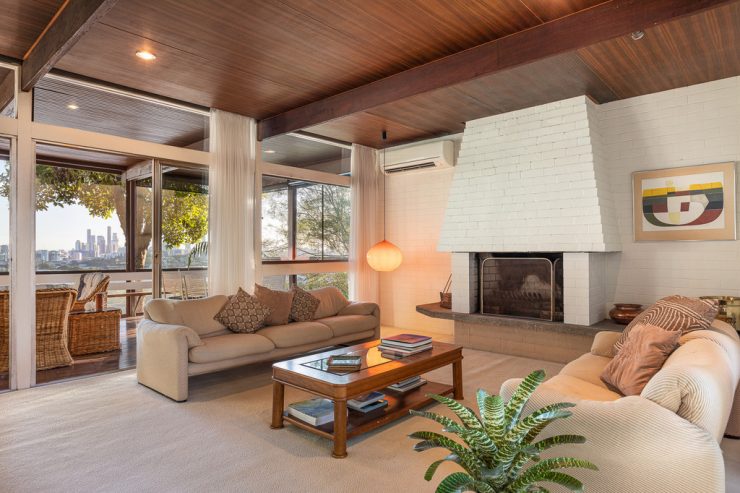 Perhaps once every couple of years we come across a residence like this – a slice of pedigree, Mid-Century, Queensland built heritage, sitting quietly and without fanfare amid the trees and bug chirps of Brisbane riverside hinterland, a home which sends us into an immediate spin of hyperventilation. This particular beauty all the more integral as an ‘architect’s own’, unchanged and simply enjoyed since its construction 1961. Louis Hailey, the architect director of firm Conrad, Gargett & Partners and then his own practice, had a stellar career in the Brisbane Modern era creating some serious landmarks such as the Good Shepherd Chapel in Bishopsbourne (c.1965) and Suncorp Plaza Tower (c.1972). Of this, his own home, ArchitectureAU has this to say;

“In 1961, demonstrating his finesse in modernist architecture, Lou designed a house at Ascot, an inner northern suburb of Brisbane, for himself and wife Pat. It was a difficult, sloping site with a large rocky outcrop yet it possessed spectacular sweeping views over a reach of the Brisbane River with CBD buildings visible in the distance. Rather than being a hindrance to the design outcome, the outcrop became a unique courtyard feature and the backdrop to a later subterranean bar.”

Yes, that bar with an internal garden. And yes that fireplace, and yes those split levels and flawless brickwork and stunning entry and river views and ….breathe…. We trust you all are well versed by now to see that no amount of our oohs and ahhh can really do this one justice. Brisbane Modernists, while we collect ourselves a call to arms to you – this is a home for a generation and deserves a true custodian – which one of you is deserving enough?